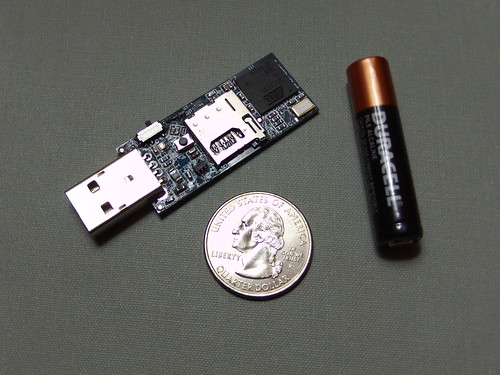 Now that I’ve got your attention with shiny things..

As an opening note, everything below is what is planned for the isostick. It’s subject to change, blah blah, the firmware is only starting to be written and anything could happen. If you think the firmware could use a feature I haven’t mentioned here, shoot an email to the suggestion line: isostick [at] elegantinvention [dot] com

What is the isostick?
It’s a USB stick designed for IT professionals and geeks in general. It accepts a microSD card and normally shows up as a USB Mass Storage Device, as you would expect. It also shows up as a USB CD/DVD drive. What witchcraft is this? What purpose could it serve!? Say you put some disk images on the microSD card — an ISO of your super special custom nLite‘d Windows installer, some Linux boot discs, some tools or recovery software (SpinRite, memtest, ntpasswd, DBAN, …) — then you fire up the included isostick software and pick which image you want to show up in the isostick optical drive. Presto! Until you change it again (or move/delete the image file), anywhere you plug in the isostick it will see a Mass Storage Device (the microSD card), AND an optical drive which has the selected image “in the drive.”
Oh and it has a read-only switch to protect the contents of the microSD card, in case you don’t trust your friends’/coworkers’ computers (or just your friends and coworkers…). For those of you always saving the day with anti-virus on a CD or USB stick, or plugging your poor USB stick into machines that tend to be infected with who-knows-what, the read-only switch may come in handy!

How much will it cost and when will it be available?
The plan is to release it next month some time, but don’t quote me on that as soon as possible. Oh, and it will be in a nice plastic enclosure by then. Cost is still up in the air, we’ll see 🙂

How does it work?
The isostick tells the computer it is two devices: a mass storage device and an optical drive. U3 USB sticks use the same trick. You are not restricted in what you can store on the microSD card, it acts just like any other microSD adapter. If you have disk images on there, though, you can put any of them “in” the optical drive. As far as the computer is concerned, there’s a bona fide disc in a drive hanging off its USB socket. You can even boot from it, presuming your BIOS supports that.

But I can just use UNetBootin / grub / etc to boot X iso from USB, why do I need this?
Maybe you don’t! But allow me to entice.. Sure, you can load one iso from a USB stick using UNetBootin, and really I love that program, it’s fantastic! With isostick, however, you can carry many iso files all at once, and switch between them with ease. Grub may allow you to do this with some isos, but as far as I’m aware, there are limits to what you can get grub to boot from a USB stick. For someone not well-versed with grub, it may also be a pain..
Suppose you don’t have a working machine to change the iso — no problem! The isostick can easily present a spare optical drive with a bootable environment to change the active image file. Also, the active image file and all configuration data is saved in a simple text file on the root of the microSD card which can be edited by hand in a pinch, or by scripts/applications to produce complex automated installers that change discs for you… Use your imagination 🙂

Still not convinced!?
Some ideas being tossed around, in no particular order:

Phew, this is a long post. Time to get back to assembling isostick boards and writing firmware!

8 thoughts on “Introducing the isostick!”